Nice that you have found yourself on my website!

Let me introduce myself:

My name is Franyo Freiherr von Hohenzollern, I was born on 4th April 2014 at my breeder Meike Schönborn and now live with my mistress in Stadtlohn (NRW).

I´d like to tell you a little bit about myself:

In these two pictures I still lived at my breeder´s place.

In the first picture, I am 6 weeks old; in the second picture I am already 8 weeks old.

One week later, my new mistress was overjoyed to come pick me up.

I was heartily welcomed by my new family in my new home. I was especially happy to have found a new friend in my new flatmate Emporo!

I went to puppy school with my mistress frequently. There were many other puppies here with their humans that I could meet.

In these pictures, I am almost 7 months old. Slowly but surely, I was prepared for the real world.

Show trainings, tracking, obedience and protection were items on my schedule from now on.

This is what the intermediate result looked like when I was 11 months old. :D

A few weeks after these pictures were taken, I started youth class and immediately after that obstained my first BOB!

More shows in youth class followed, like this one here in the pictures at the DV Abt. Recklinghausen in 2015. I was 14 months old here.

Of course I have still been exercising. ;)

In the video I am still 14 months old by the way.

In November 2015 I successfully passed my first two exams: first AD, and then BH. :)

Three months later I passed my ZTP with V1A and the following months the IPO1.

Here´s a short insight into one of my training weekends. :)

First I passed my IPO2 and made my first grand performances.

I won the res.-CACIB in Warsaw, I was in the finale of the working class at the DV Siegerhauptzuchtschau and got the Exc. 4 here and I was at the IDC in Hungary (Tápiószentmárton) and got an Exc. in the working class there.

The first tries in champion class were awarded with an Exc. 1. :)

In addition, the year 2017 has given us wonderful and unforgettable moments! My first children were born! :)

The first show in 2018 was a complete success:

I won the CACIB & BOB at the CACIB Lubin! Now I´m an "International Champion"!

On the 17th May I had my first shooting in the studio! I´m really in love with the result!

And also Denise had again an outdoor Shooting with me! :)

Also in 2018 we were at the IDC. This year for the first time with progeny: Get to the Point Pandora of Chopitea got a VP in Puppyclass!

I decided this year to be in Honour Class. Here I reached the 3rd place! 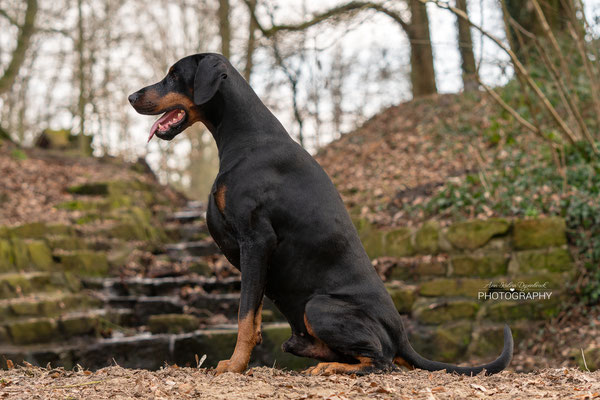 In february we had luck, that Anka had time to do a shooting with me. :) Also my heart was repeated tested healthy again!

We´ll keep you posted on more concerning my career, and news regarding my kids! :)